skip to main | skip to sidebar

The factory was established in 1898 by a Scotsman, Alexander Morton (1844-1923) and was originally called Alexander Morton and Co., later changing it’s name to Donegal Carpets and has hand made carpets since then for some of the most famous buildings in the world including The White House (home to the President of the USA), the Vatican in Rome, Buckingham Palace and Windsor Castle (homes of Queen Elizabeth II UK), 10 Downing Street (London, UK, official residence of the British Prime Minister), Dublin Castle, The Royal Pavilion in Brighton, and of course Ireland’s official residence of the President of Ireland, Aras an Uachtarain.

The Heritage Centre is in just a small part of what was the much larger Donegal Carpets factory and you can see some of the looms on which the carpets were made including the longest hand-knotting loom in the world, a huge loom made of Canadian pine which measures some 42 feet in length (see pic above). When it was in use it would have had between eight and twelve weavers sitting at it working on carpets of up to 40’ wide.
Before you enter the working part of the factory you can take a seat in a separate room and enjoy an audio visual display on the history of the carpet factory. The display includes lots of old film showing the workers of the time and how extremely arduous the task of making these superb carpets was.

After the audio visual display, you can visit the floor of the factory and learn how the carpets were made, see the looms on which they were made and the equipment used and even enjoy a live demonstration of the hand-knotting process and perhaps have a go yourself.

You can see too the intricate hand drawn patterns used to make the various designs on these carpets.

There are samples of the weavers’ skills to be seen all around the factory including a carpet that was previously laid in Aras an Uachtarain (the official residence of the President of Ireland). The carpet was made in 1948 and replaced in 2000 by the then President, Mary McAleese. The original was an aqua coloured background and the replacement used the same design but with a green background.

The original carpet which is now in the factory is still in almost perfect condition. This is certainly a carpet with history ~ since it was laid down in 1948 it would have had the foot steps of many famous people walk it’s cushioned, luxurious pile including Princess Grace and Prince Ranier of Monaco, King Juan Carlos and Queen Sophia of Spain, Pope John Paul II, American presidents: John F. Kennedy, Richard Nixon, Ronald Regan, and Bill Clinton.

The replacement one has seen its fair of famous people too, most recently Queen Elizabeth II and Barack Obama. 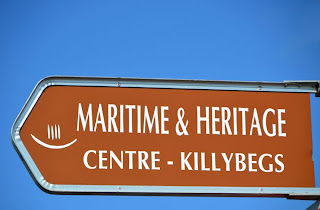 Later you can visit the Marine Simulator which is in the centre too.

From their website: “The ship’s interactive simulator brings to life the excitement, difficulties, hazards and skills of handling ships at sea. Join the crew and experience the sights and sounds of the vessels in operation, and feel the vibration of the ships engine. The simulator is based on the software used to train ships captains and rescue services. Through three interactive screens, visitors use real navigational equipment, electronic charts and radars to make their way through scenarios that are graded to suit the expertise of the user.”

While the above piece is informative and no doubt true, I who have never steered as much as a dingy let alone a ship or a trawler, had a ball taking a trawler out to sea in huge stormy seas. Obviously I was totally rubbish at it and had it been in anyway real, I fear we would all have been totally sunk! But it was great craic and I was only glad there were no other visitors around to witness my cavalier “skills” and hoots of laughter as I narrowly avoided other boats in the harbour.

But using as it is mean to be used and not in my way, you can take the chance to experience steering a ‘virtual’ trawler around Killybegs harbour and out to sea or even ‘rescuing’ a man overboard as coxswain of the Killybegs lifeboat. The Simulator can be set to change the ‘conditions’ from good weather to extremely bad weather and you are given an option of ‘tasks’ to carry out as captain.

‘Easy option’: “It is a beautiful August morning in Killybegs. A visiting yacht is entering the harbour but one of the crew has just fallen overboard. You are the coxswain of the Killybegs lifeboat. Your mission is to first find the yacht and then find the missing crewman as quickly as possible. You have five minutes.”

And the ‘Hard option’: “You are the skipper of a large fully laden stern trawler arriving back from a difficult fishing trip. The weather is awful. There is a 2.5 meter following sea and near gale force SSW winds. You have to bring your vessel safely into Killybegs and put her alongside the south end of the new pier after the Cruise liner (moored there) has departed.”

It’s a very real experience, and indeed the simulator itself uses the same computer package as that used to train ships captains and lifeboat crews, and with the trawler or boat dipping up and down in swollen seas in front of you it’s also great fun for both adults and children and I guarantee you will want more than one attempt.

The staff at the Donegal Carpets and Maritime and Heritage Centre are friendly, welcoming and very knowledgeable. They are local people with a vast knowledge of and love of their town and it’s history. In the reception area of the centre there is a small cafe and lots of information leaflets about the area. There is also internet access available on a number of computers set up there.

Location: Killybegs (at the edge of the town on the road to Sliabh Liag/Slieve League)

Parking: Ample parking and no charge

Cafe: Yes, small snack area with computers for internet use

BLOG NOW MOVED TO: WeLoveDonegalBLOG
This blog is an extra element of our main website, WeLoveDonegal.com, the aim being to to add bits and pieces that may or may not be on our website but may nonetheless be of interest to our readers. The blog also gives us the chance to elaborate on items on our website in more depth.

Other posts will take you with us on our trips around Donegal, a sort of 'virtual' tour of our county if you will. These posts will be accompanied by photographs to bring the whole thing to life for our readers.

Occasionally we will also add 'Behind the Headlines' posts, posts where we have looked further into something Donegal related which you may have read about in various media. These will usually be accompanied by our photos of the people or places involved in order that our readers can get a more personal feel for a news story.